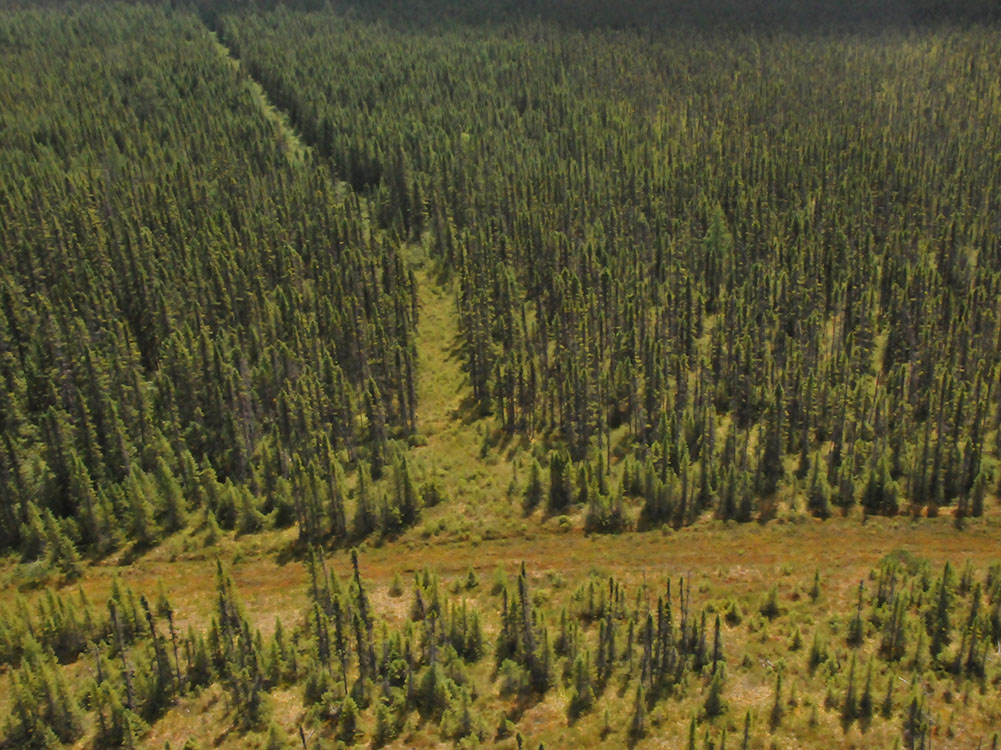 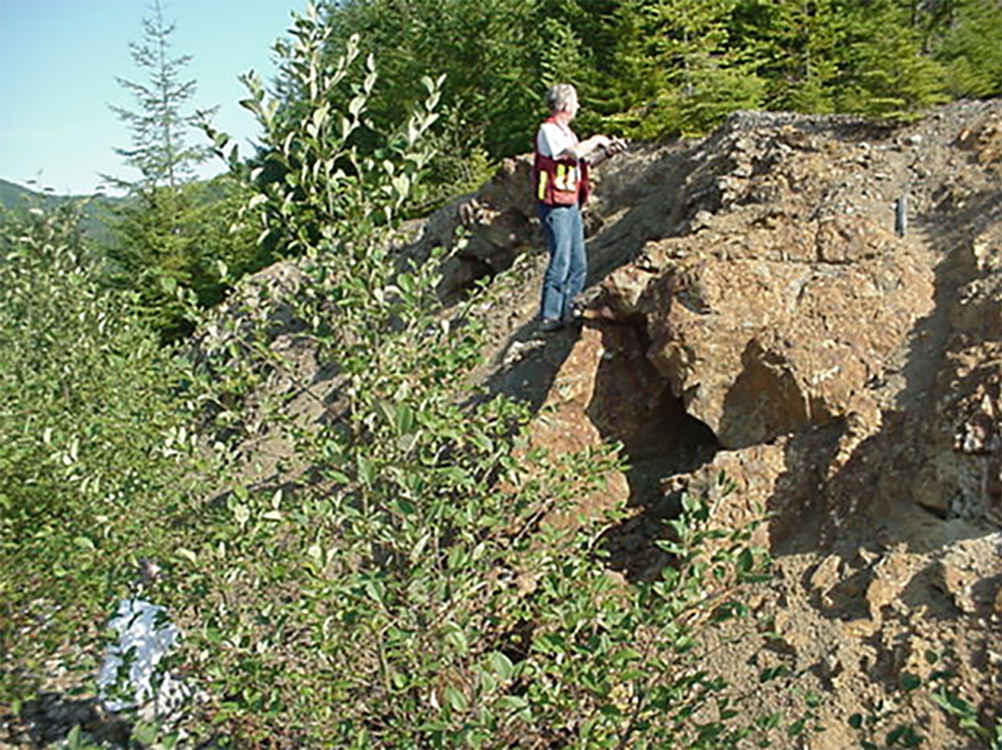 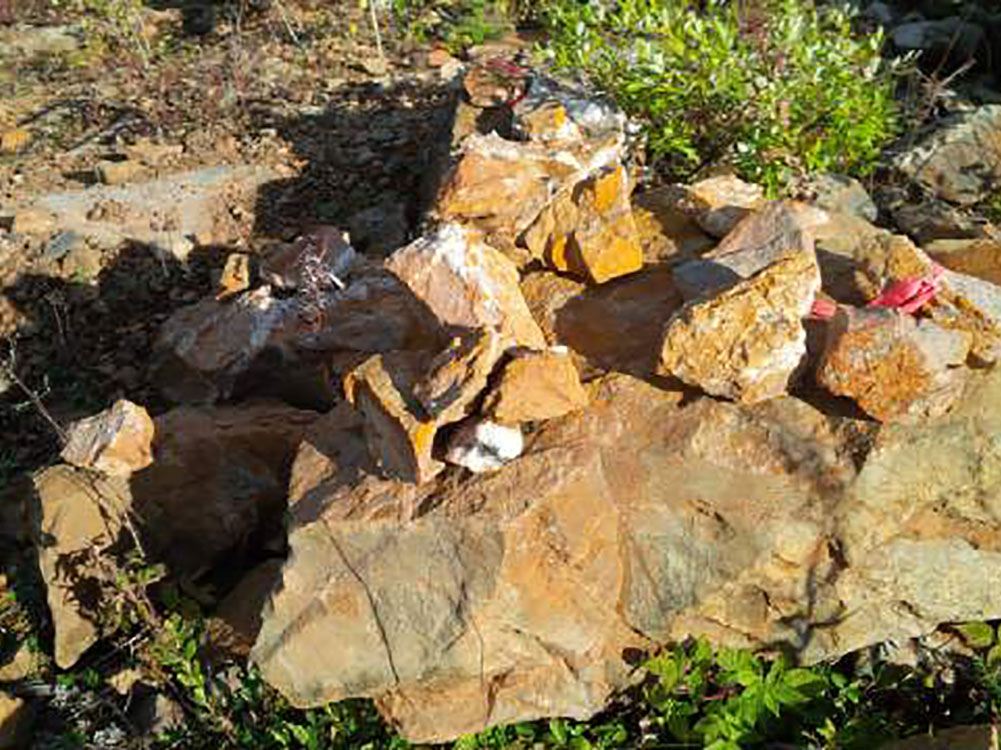 Regional geological information for the area includes a 70m to 230m mafic intrusion, possible structurally controlled, with a NNW-SSE orientation and about 200m wide, tapering towards the extremities. Refer to Figure 1 and 2. This rock type is also found within the Lake Shore property (and many others) and is indicative of host rock which typically hosts the gold mineralisation.

PREVIOUS WORK DONE ON THE PROPERTY

The property has unverified grab sample results, supporting photographic evidence of structurally controlled vein quartz intrusions as well as evidence of vein swarming. The original prospectors (supposedly Doug Lalonde and Gilles Allaire) drew a correlation between the veining and the gold mineralisation. A photography of a typical sampling site is shown in Figure 2. The proposed association is realistic although a verification process needs to be carried out. Grab sample values of the veining range between 3.03g/t and 3.13 g/t. Historical reports have indicated values of 4.51oz/t gold and 2.11oz/t silver. A total of three samples were taken and analysed at an undisclosed laboratory. It must be noted that there is no recorded position for the actual sampling positions but it is assumed to be related to and within an area called the ‘strip area’ and within the lease area. The sampling was done around November 2013. Further evidence of mining activity in the area are the remnants and collar position of three shafts found on the property. It is evident that the shaft positions strike in the same direction as the regional geological ultramafic unit suggesting a mineralisation associated with the interface of the ultramafic and mafic rock masses.

The association of the shafts and their positions along strike, together with the vein quartz intrusions and the vein swarming, is unknown but there appears to be linear relationship along a SSE trend. The mafic/felsic interface has a strike distance of 600m and is contained within the central third of the property. A 250m metre fault (lateral wrench) has displaced the target zone to the NE on the western side of the property. The target mineralisation also extends towards the SSE.

This geological environment is conducive to gold production with the TWM having a significant resource and production profile. A total of 1.25 million tonnes at an average grade of 4.4 grams per tonne gold (176,644 ounces) has been milled from the Timmins Deposit from 2009 to 2013. The mining is done at a minimum width of 2m and at a cut-off of 1.5g/t.

Related references to similar geology are cited by the undated Benoit and Gosselin report (Greenstone-Hosted Quartz-Carbonate Vein Deposits, Geological Survey of Canada, Quebec) in which the greenstone-hosted quartz-carbonate veins within tholeiitic basalts and ultramafic komatiitic flows, intruded by intermediate to felsic porphyry intrusions and swarms of albite and lamprophyre dykes. The intrusions occur within compressional and trans-tensional crustal-scale fault zones and at the interface of major lithological boundaries (eg volcano-plutonic and sedimentary domains). The gold is mostly related to the quartz-carbonate veins but can be disseminated throughout the wall-rock.

Further to the above, reports from Yellowknife Greenstone Belt (Hydrothermal Alternation Associated with Gold Mineralisation at the Giant Yellowknife Mine, NWT: Santaguida, F. and Falck, H. undated) describe a hydrothermal alternation system hosting gold mineralisation. The alteration occurs within mafic volcanic rocks and the assemblages consist of:

The Jasper Property claims are located in the Victoria Mining Division, southwestern Vancouver Island, BC, Canada. The Property is approximately 80 kilometres northwest of Victoria and is centered at latitude 48°50’ and longitude 124°35’. The southern portion of the claims overlie much of the Caycuse River and its tributaries Four Mile Creek and Seven Mile Creek, extend northwards over the height of land to the tributaries of Jasper Creek, and westwards to a no staking reserve along the eastern shore of the Nitinat.