All reserves and resources are NI 43-1201 compliant
Data compiled from DigiGeoData database, Alaska Government data, technical reports and corporate websites
DigiGeoData has compiled this information using best practices and does not warranty the completeness or accuracy.
All data should be checked and verified before use

The lure of gold brought prospectors by the thousands to Alaska. Cities such as Fairbanks, Juneau, and Nome as well as many other communities, were founded in mining. While the discovery and production of gold in the late 1800’s is what many associate with mining in Alaska, the later discoveries and production of zinc, lead, silver, and coal helped shape Alaska’s mining industry.

The first recorded mining venture was in 1948 on the Russian River, Kenai Peninsula. From 1854 to 1857, Russian American traders mined coal from thin seams near Port Graham. The first recorded mineral discovery of copper was on Prince of Wales Island in 1867. Placer deposits at Windham and Holkham Bays were worked between 1869 to 1871. Hard rock mining first started at the Stewart Mine near Sitka in the mid-1870’s. In 1880, placer gold was discovered by the present city of Juneau. This led to the production of lode gold from low grade mines in 1882. Eventually larger scale mining was initiated at the Treadwell, Perseverance and Alaska-Juneau Consortia mines.

Prospectors explored interior Alaska areas such as Fortymile and Circle in the 1880’s and 1890’s. Gold discoveries on the coastal regions at Unga Island and Sunrise on the Kenai Peninsula in the same time frame resulted in small gold rushes and gold production.

Copper mining began in Southeastern Alaska around 1900 and by 1905, 10 mines were in operation around Ketchikan. Production of the rich Kennecott deposits in the Chitina Valley began in 1911 after the completion of the railroad. Tin was first mined in 1902 on the Seward Peninsula.

Production of all commodities declined after World War I. After the war, high silver prices stimulated development of Alaska’s silver industry with mines at Hyder, Kantishna and Kaiyuh Hills.

The worldwide depression of the 1930’s caused a dramatic decline in Alaska’s mineral industry. Several mines were closed. Then in 1934 the price of gold nearly doubled to $35 per ounce. The result was a boom in Alaska gold production by the 1940’s.

Then came World war II and most of the mines were closed once again.

In the 1950’s metallic metal production was limited due to high operating costs. However, in the mid1950’s, platinum, tin and mercury were in demand because of the high market prices. In 1957, Alaska produced close to 20 percent of the United States mercury.

In the 1960’s, the need for uranium for nuclear weapons and peaceful energy applications resulted in the discovery and development of the Bokan Mountain uranium-thorium mine near Ketchikan.

The 1980’s saw another boom in Alaska mining. The Valdez Creek mine started production in 1984 and continued through 1995.

The Red Dog mine began producing lead, zinc, and silver in 1989 and was the largest zinc mine in the world for many years and is currently producing at the end of 2019. It has produced 31 billion pounds of zinc to the end of 2019.

The Greens Creek mine also commenced production of lead, zinc, silver, and gold in 1989. It is considered one of the largest primary silver producing mines in the world having produced close to 238 million ounces of silver by the end of 2019.

The Fort Knox Mine near Fairbanks was discovered in 1987 and initial gold production began in 1996 and has produced over 8 million ounces by the end of 2019.

The Pogo mine near Delta Junction began production in 2006 and has produced over 4 million ounces of gold by the end of 2019.

The Kensington mine near Juneau began gold production in 2010 and is part of the historic Kensington and Julian gold mines. Current production to the end of 2019 is just over 1 million ounces.

Mineral exploration continues at a robust pace today with many promising deposits on track for production.

Alaska comprises multiple geologic terranes varying in age from Quaternary back to 2.0-2.5Ba Paleo- Proterozoic, with most terranes having been accreted from the Upper Paleozoic to the Cretaceous 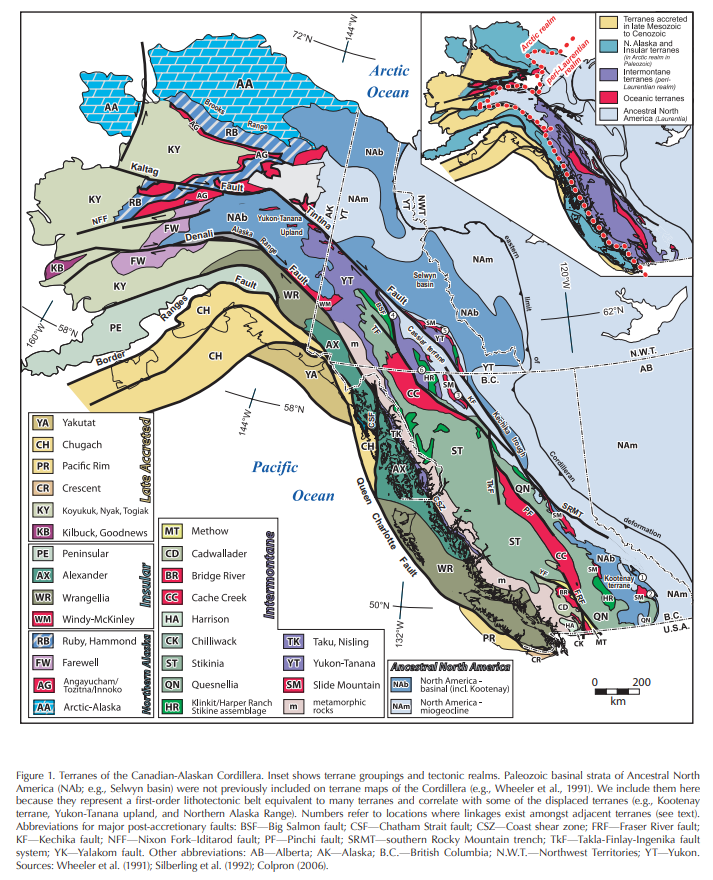 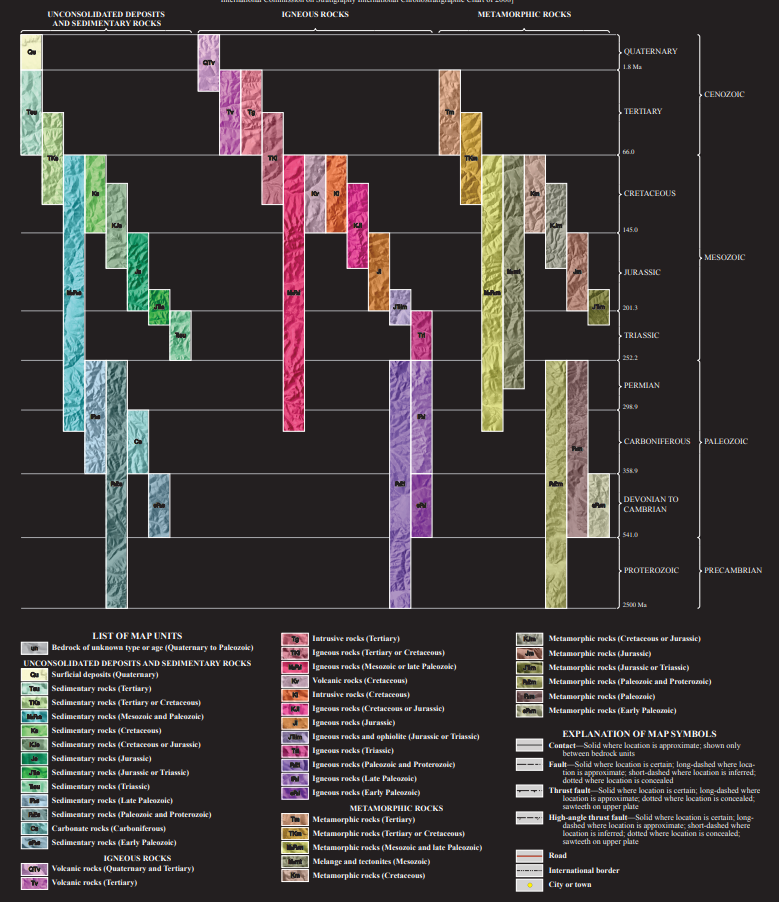 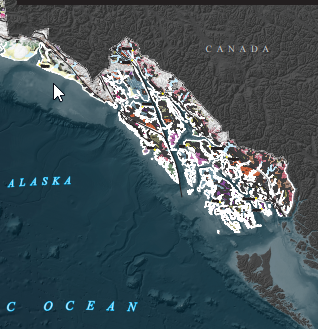 Some Main Mining Areas and Deposit Mineralisation Styles of Alaska

Base Metal Deposits of the Brooks Range, Northern Alaska 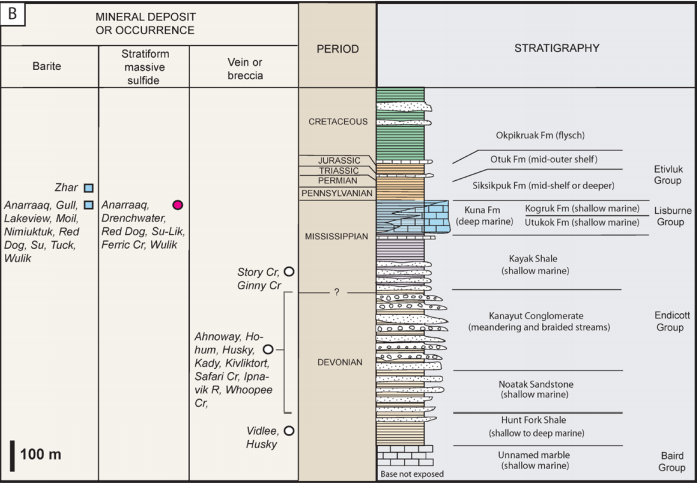 Red Dog
is a Carboniferous black shale hosted, fine grained Zn-Pb-Ag SEDEX deposit; stratabound, and barite rich at the edges of the main sulphide mineralisation. The Zn:Pb ratio decreases upwards in the ore zone.  Although the prime mineralisation style is SEDEX there are also components with an apparent replacement origin. Similar satellite deposits include Su-Lik 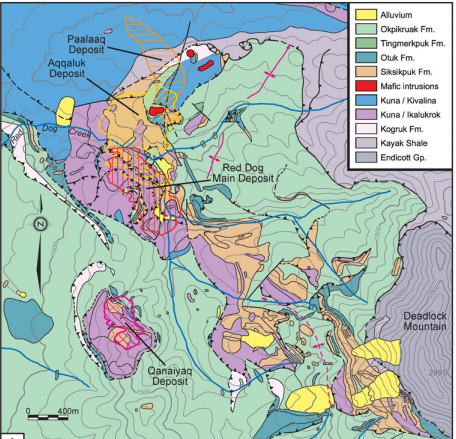 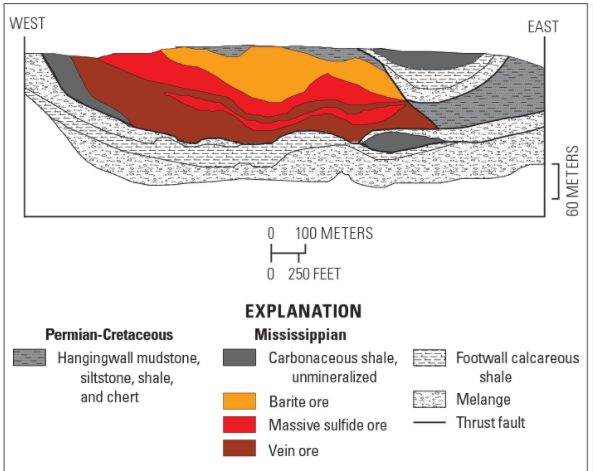 Story Creek is a shale hosted Zn-Pb-Ag deposit in the northern Brooks Range. Mineralisation is epithermal, and occurs as NE/SW parallel veins and zones of brecciation in the Kayak Shale

Many VMS deposits are within the ‘Schist Belt’, and occur as Middle to Late Devonian-Lower Carboniferous bimodal Pb-Zn rich deposits. Mineralisation at Arctic is within graphitic and micaceous schists 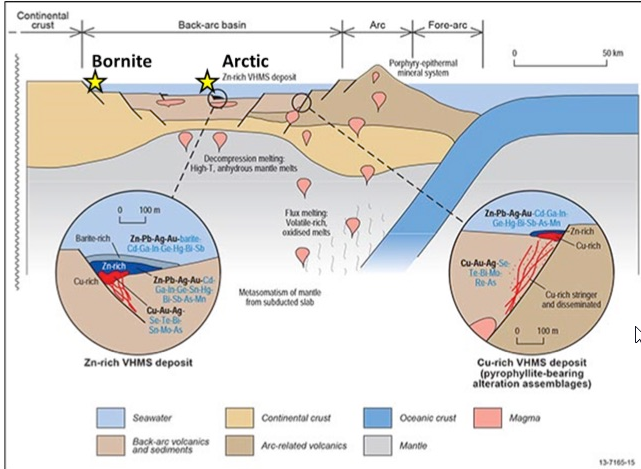 Mineralisation at Bornite is either SEDEX, MVT, or Carbonate Replacement in style and is a Cu-Co deposit

There are many other VMS deposits in Alaska; one of the biggest is at Greens Creek in the far SE of the state, 27km SW of Juneau; it sits in the Triassic Alexander Metallogenic Belt ( in the same belt as Windy Craggy, BC ); mineralisation occurs at the Carboniferous-Late Triassic unconformable contact 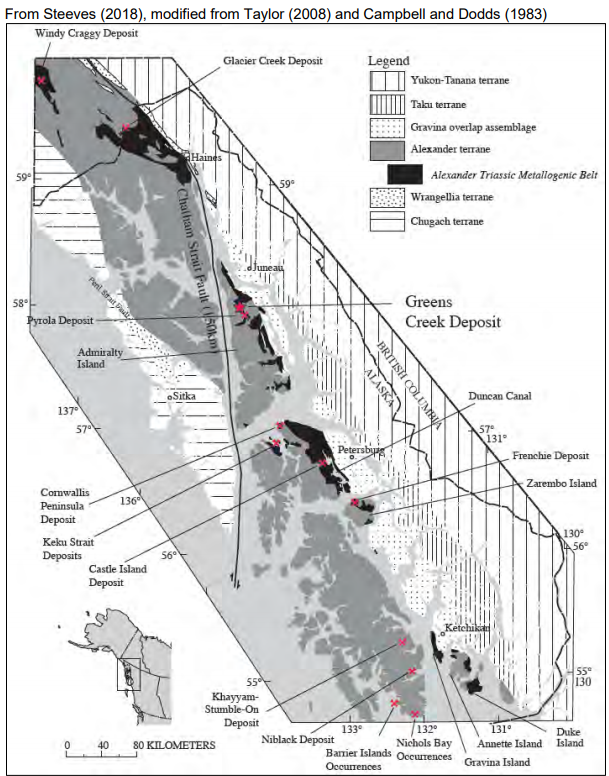 Ranging from sheeted quartz veins in the intrusions and metamorphosed sediments, to skarns, replacements, greisens, breccias and disseminations. The most widely recognised examples are in Cretaceous intrusions in the Yukon and Alaska.

While most of this group involve gold, there is a wide spread of occasionally other commodities involved, even if these are not technically part of the IRGS group ss.

Intrusion related gold systems display a broad range of structural styles reflecting their varied depth of formation. This range of styles can be present even for mineralised zones surrounding a single intrusive centre. Gold occurs associated with quartz-rich veins, zones of skarn or

replacement, in greisens, or along altered faults and fracture zones. Sulphide content is generally low

Alaska is one of the original regions that spawned the relatively recent IRGS Mineralisation Style, with the Pogo, Fort Knox, True North, Shotgun, Money Knob ( Livengood ) and Donlin gold deposits in the Tintina Gold Province. 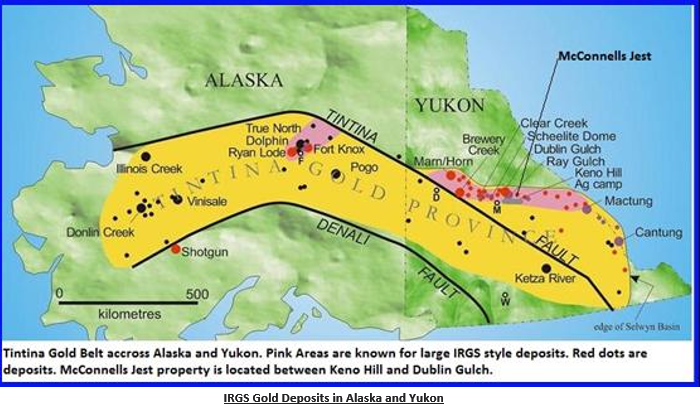 At least 55% of all Alaskan gold production has come from placer mining, with the main areas including beach and alluvial mining around Nome and Solomon-Council and other parts of the Seward Peninsula, , alluvials around Fairbanks, as well as at Fortymile, Iditarod, Innoko, Livengood, Valdez Creek and many other areas.

Alluvial PGEs have been mined extensively from the Goodnews Bay area 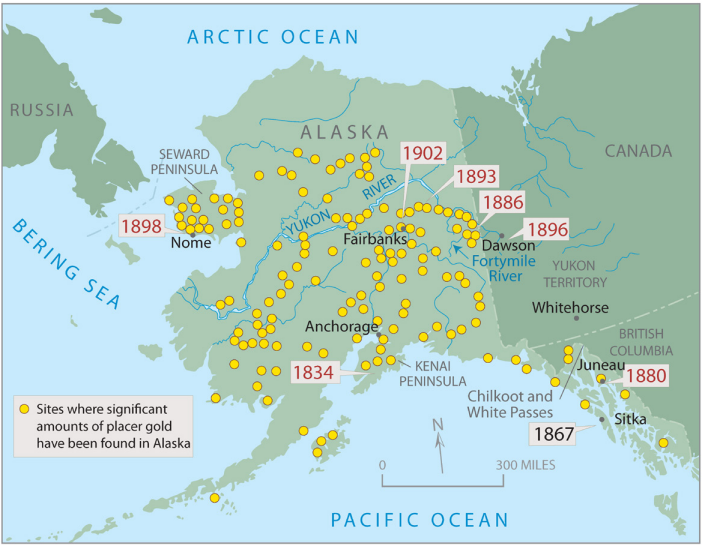 Alluvial gold mining led to the discovery and development of major turbiditic gold at Treadwell-Douglas,Alaska Juneau, Kensington, Perseverance and many other deposits in the Juneau district

Mesothermal Lode Gold deposits are common across Alaska, with the largest historically being Chichagoff, Cleary Hill and Lucky Shot. Larger current deposits include Flume Creek and Herbert whilst the Dawson mine re-opened in 2019

Alaska hosts the world’s largest undeveloped copper-gold deposit, with Pebble also containing significant molybdenum and silver. Other significant deposits are Orange Hill and Bond Creek, but several other porphyry deposits are uneconomic due to low grades and geographic isolation

There are many polymetallic skarns in Alaska, but only the Nixon Fork gold skarn is in production, and with Zackly at Alaska Range, 190km SSE of Fairbanks being a significant current deposit. Most other skarns are closed historic mines, such as the long-producing Kennecott copper mine which produced some 500 Mt copper from 1905 to 1938 in the Wragnell Mountains, 380km east of Anchorage, plus Lost River.

There are a couple of couple of closed mines or never developed Ni-Cu-Co deposits ( Funter Bay and Brady Glacier ), plus one closed, layered intrusion, chromite mine at Jakolof Bay / Red Mountain

Epithermal Deposits of the Alaskan Peninsula

The far SW of the Alaskan Peninsula hosts a series of Epithermal Intermediate Sulphidation gold deposits on Unga and Popov islands, three of which had significant gold production from the 1880’s to the 1920’s. Current resources exceed 1 M oz of gold plus significant silver 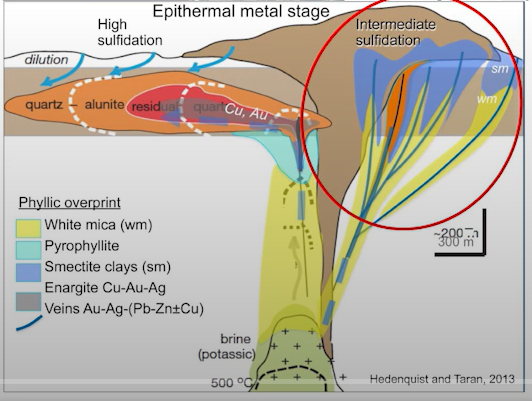 This deposit style is represented by a closed uranium mine ( Ross Adams ), plus a high grade, polymetallic Heavy REE-rich deposit at Bokan Mountain, each some 57 km SW of Ketchikan 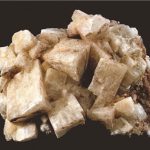