Data compiled from DigiGeoData database,Ontario Mineral Deposit Inventory, technical reports and corporate websites DigiGeoData has compiled this information using best practices and does not warranty the completeness or accuracy.
All data should be checked and verified before use

Silver was first discovered at the southeast end of Cobalt Lake in 1903 by James J. McKinley and Ernest Darragh, who working on the new Temiskaming and Northern Ontario Railway. They noticed metal in a road cut, staked a claim, and sent samples for assaying. The samples returned values of over 4000 ouncers of silver per ton.  This claim became the McKinley-Darragh mine which started production in 1904 and produced over 17 million ounces of silver until it closed in 1954. 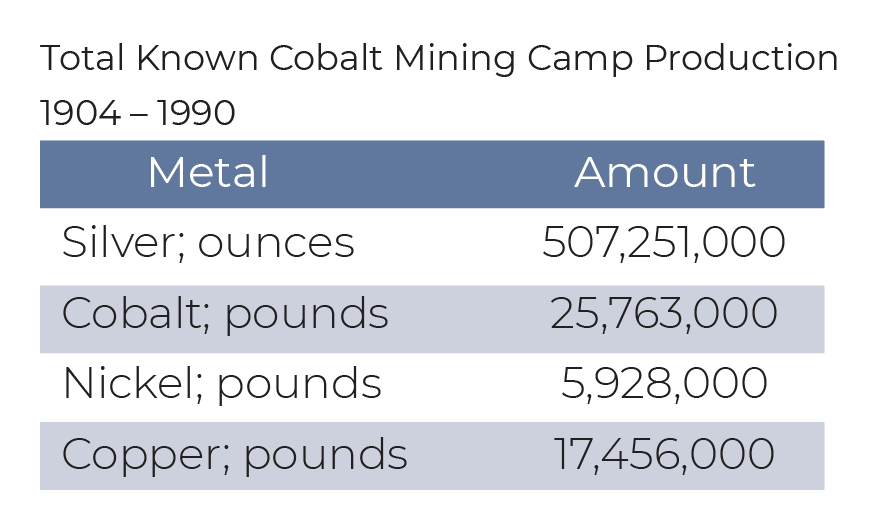 This was the beginning of the great Cobalt Silver Rush.

At the peak of production, there were 100 operating mines and 18 mills supported by a population of 12,000 people.

By 1910, the Ragged Chutes Compressed Air Plant supplied compressed air to the area mines through an extensive network of pipes, some which can still be seen today.

The Cobalt Silver Rush lasted into the 1930’s. By 1932 only one mine remained open. Immediately after the war, cobalt became a valuable mineral and several mines re-opened.

There was a brief resurgence in the 1950’s which lasted into the early 1970’s. A number of mines continued to produce with the last two mines, the Beaver and Langis, closing in 1989.

The town of Cobalt was named by Willet Green Miller, Ontario’s first Provincial Geologist. While visiting the area in October of 1903, Miller set up a crudely lettered board which read “Cobalt Station T. & N.O. Railway”.

During his visit that year, Miller interacted with many of the prospectors, helping them to identify silver in the rocks. The following year he headed a full-scale geological survey party which resulted in a significant and optimistic report for this new mining camp. In his report he spoke of “pieces of native silver as big as stove lids or cannon balls lying on the ground, as well as cobalt bloom and niccolite.” 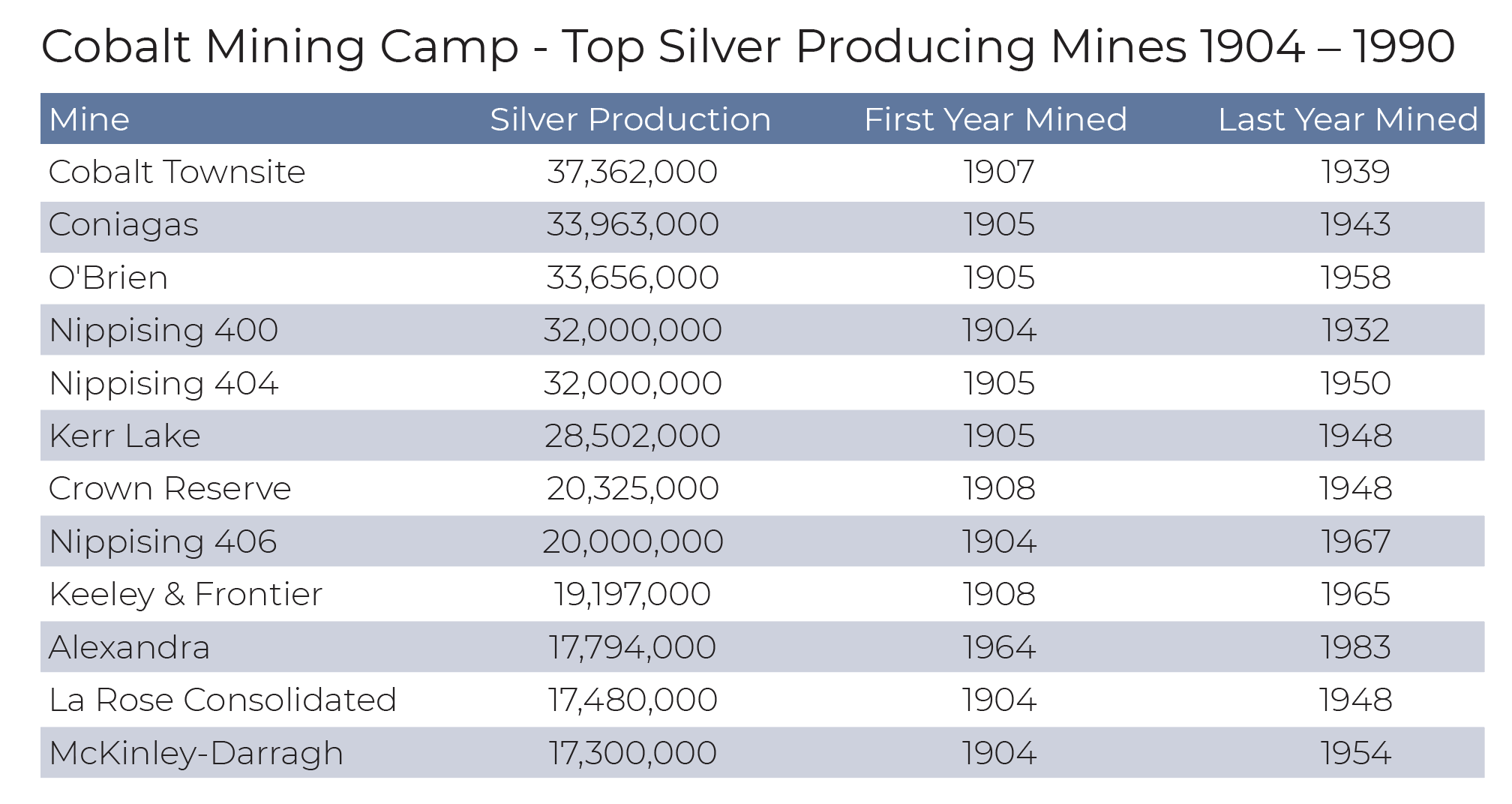 Silver was produced mainly from veins, some up to 10 feet wide and assaying over 4200 ounces per ton.In a sense Cobalt has always been a “poor man’s mining camp”. Because most of the rich mineral-bearing veins lie close to the surface, very deep mines and costly operations have never been necessary. Generally, the individual mines were not large or elaborate operations such as may be found in other areas of Northern Ontario, but the ore was sufficiently rich and plentiful that such large plants were not required.

Many miners and prospectors learned their trade in Cobalt, and then moved on to discover gold in Kirkland Lake, Timmins and elsewhere. The hundreds of relatively small mines developed early in Cobalt’s history were consolidated over the years into bigger mining companies that went on to develop other mines.

Cobalt is one of only 3 mining camps in Canada—Dawson City in Yukon and Barkerville in British Columbia are the others—to be designated as a National Historic Site.

It has earned the distinction of Ontario’s most historic town.

Cobalt has remained one of the great Mining Camps to this day.

A small outlier of Paleozoic strata is exposed to the north between New Liskeard and Englehart.

The oldest rocks in the Cobalt Silver Camp form the southernmost portion of the Western Abitibi subprovince. These include predominantly massive and pillowed intermediate to mafic metavolcanic flows with intercalated pyroclastics and metasedimentary rocks; felsic metavolcanic rocks are relatively rare. These Archean rocks were folded and intruded by stocks and batholiths. The eroded Archean surface was unconformably overlain by relatively flat lying Paleoproterozoic sedimentary rocks of the Cobalt Group of the Huronian Supergroup, forming the Cobalt embayment.

In the Cobalt area, the Cobalt Group is composed of the Gowganda and Lorrain formations. All of the described rocks were intruded by a thick undulating sheet of Nipissing diabase. The Nipissing diabase is a suite of gabbroic intrusive rocks and differentiates. Later diabase dikes intrude all the rocks.

The main mineralization is found as silver-cobalt-nickel arsenides in calcite and dolomite veins. Native silver is the main ore mineral. Veins vary from 1 mm to 1 m in width and can be found cutting Archean, Cobalt Group and Nipissing rocks. Ore is localized in shoots and found not more than 200 m from either the top or bottom of Nipissing diabase intrusions (Jambor 1975; Owsiaki 1984; Smyk 1987).